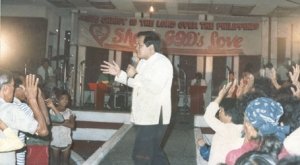 The ministry of Jesus Christ Saves Global Outreach started in 1980 as a bible study group of 7 couples where Jonathan & Vicky Sebastian was led by the Lord to facilitate. The group evolved as the LOVE CIRCLE ministry and their first venue was at the assembly hall of the Philippine Heart Center for Asia in East Avenue, Quezon City. However, the group began questioning not only the validity of Ps. Jonathan’s teaching but his credentials as well. Subsequently, the group went on their separate ways but Jonathan and Vicky Sebastian heeded the call of God in their lives and continued the ministry. Focusing on family relationship, they started to strengthen their faith in different biblical truths and principles and they remained there for about a year. 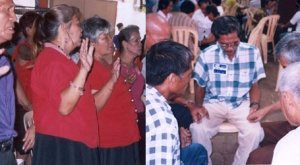 Sometime in 1981, the group transferred to U.P. Abelardo Hall and conducted a Sunday Worship Service there for two months until the Lord moved them again to the SSS Auditorium in Quezon City. But as they grew in number, persecution likewise increased until the administration of the said officials told them that they can no longer continue in the said venue. Pastor Jonathan found an alternative at the Kobe Disco & Restaurant in Cubao-Santolan area in Quezon City. Believing that God has a purpose and plan for that place, the group stayed there for almost a year. Pastor Jonathan recalled that they could clean up the place and cover the wine bottles with a cloth so they convert the place into a worship hall in the morning. It was also during this period that Pastor Jonathan who was still working in a pharmaceutical firm found it as an opportunity to share the gospel of salvation to the different places where he was assigned. He started conducting evangelistic meetings and crusades until the first chapter was established in Santiago City, Isabela in July 1982. 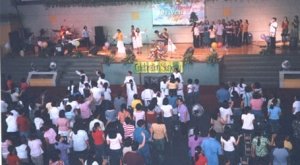 In 1984, The Lord instructed Pastor Jonathan to register the group as SHARE GOD’S LOVE ministry as they moved to Broadway Centrum in Aurora Avenue, Quezon City. Upholding its principles as a non-denomination, non-sectarian, bible believing full gospel church, souls kept seeking God and finding their way to this fellowship. Pastor Jonathan than committed himself to full-time ministry and more wisdom was given to him in evangelism and several ministries that were started to equip the saints. In 1986, the Church ventured into the Sound the Alarm television & “Laging Tagumpay” radio programs. Both broadcasts drew thousands of believers to the Lord Jesus Christ. As the Church further enlarged in number, several oppositions came to withstand its way. Soon the church left to Baler, Quezon City and the congregation continued to follow its leading in 1986. 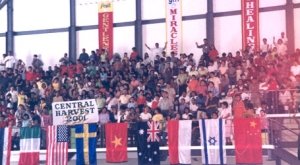 In 1987, the group found its way back to the Assembly Hall of the Philippine Heart Center for Asia (OHCA) under a newly registered name as the JCS Global Outreach, Inc. also known as JCSGO. Praise and worship have been the ministry’s strength. From crusades to evangelistic concerts, the church capitalized this passion for music to bring in more people into the Kingdom of God. The Church then recognized the need for the structured administration as expansion came. An administrative office was set up and several people pooled into work as headed by Pastor Jonathan and his wife Vicky, who was still working at that time. However, in 1988, a turnabout happened. The whole administrative staffs and most of the members of the praise and worship band and singers left in rebellion against the Church leadership. Pastor Jonathan who has no intention of making known to the congregation was exhorted as Apostle Emmanuel Cannistraci prophesied about it and gave instruction regarding the matter during one of the Sunday worship services at the PHCA. 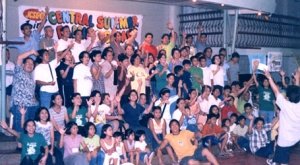 JCSGO continued its ministry in 14 Balete Drive, Quezon City in a 10-year lease contract by 1989. A change in the registered name was filed under The Minister of Jesus Christ Saves Global Outreach Covenant Church, Inc. A new set of administrative staffs was raised with Vicky Sebastian joining her husband in full-time ministry as the administrator. The church faced greater challenges as it pursued another level of growth and spiritual maturity. It has developed multi-ministries to cater to the needs of both the local church and its congregation including music, dance, teaching, children, evangelism, drama, prayer warriors, ushering, youth, among others. After the Sound the Alarm television program that ceased broadcast in 1990, the Laging Tagumpay radio ministry was opened. Sunday worship schedules were likewise increased to 5 services during this period as well as the formation of the pastoral staffs. 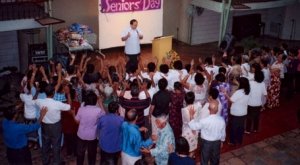 In 1992, Pastor Jonathan started receiving the vision of the Megachurch. Alongside was the instruction to purchase a huge property that would house the said vision. The Lord started hastening the confirmation to Pastor Jonathan as negotiations were made open for the 5,380 sq. m. property along 15th Avenue, Cubao, Quezon City. In March 1994, a committee was formed defining the vision and on many of the same year, the first miracle offering brought 3.4 million pesos of free-will offering unto the Lord. God miraculously provided through unexpected sources and weekly contributions of the pledgers that sustained the project so far. In January 1996, JSCGO was favored by the Lord to speed up payments through a loan facilitated by Metrobank. On the occasion of The Seed’s 2nd year anniversary on July 21, 1996, the groundbreaking ceremony took place and a free-will offering of 5 million pesos was poured in by the Lord. 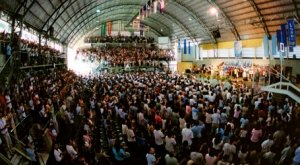 As the project evolved into ministry and partnership, the vision reinforced and redefined the structure of the church. From the conventional multi-ministries, Pastor Jonathan introduced the mentoring system by December 1994. After a year, the congregation started doing house to house evangelism every after service and has performed ministry assignments per mentor groups. While the several improvements took place within the ministry, the development of the lot property in 15th Avenue progressed as well as the construction of building facilities. On March 15, 1997, the first function that took place within the temporary building was the 25th anniversary of Pastor Jonathan and Sis. Vicky Sebastian. It was followed by the first Sunday Worship in June 1997. Meanwhile, the Balete Drive contract expired during this period and thus JCSGO officially moved all its offices and temple activities on August 1997.

As of 2001, JCSGO total disciples reached 15,000 with 3,000 leaders, 1,500 Care Groups and 150 local outreaches situated in different regions of the Philippines. It has expanded its vision to other parts of the globe by establishing mission outreaches in Canada, Hongkong, Australia, Japan, USA, Germany, Singapore, and Malaysia.